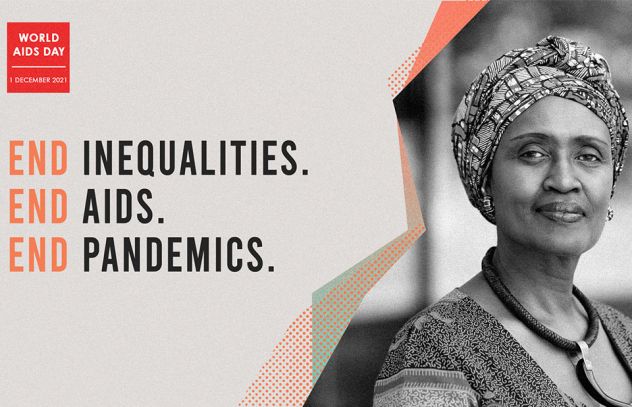 This year marks a sombre anniversary.  On 5 June 2021, it was forty years since disturbingly unexplained cases of illness and death – later called AIDS – were first officially tabulated.  These four decades have yielded enormous medical and scientific progress – but too many deaths and far too much stigma remain very much with us.

Too many still elude testing, or die in silence and shame; treatment does not reach all who need it – and inequality and discrimination impede our global response.

Today, I am able to pen this because life unexpectedly afforded me survival from AIDS.  Twenty four years ago, I started on life-saving antiretroviral treatment – enabling me to bear witness to how discriminatory laws and policies damage those this fearsome epidemic imperils.  Let me explain.

Around Easter 1985, in my early 30s and setting out on my career, I became infected with HIV.  In those terrible years, no treatment existed: HIV meant certain death.  Stigma and fear choked all who had or were suspected of having HIV or AIDS.

Like many others, I kept my HIV a secret.  I hoped against hope that I would escape the spectre of death.  No.  Twelve years later, AIDS felled my body.  With the certainty of death impending, I became terribly ill.

But my privileges gave me access to treatment and care.  I had loving family and friends, and my job as a judge to return to.  With early access to antiretroviral (ARV) treatment, I survived.

In 1999, I spoke publicly about living with HIV.  I explained that ARVs had saved me from certain death – but that millions more in Africa were denied them.

Today, I remain one of the only people holding public office in Africa to speak publicly about being gay and about living with HIV.  I say this not to claim credit, but because so much shame, fear, ignorance and discrimination still silence too many in too many places.

From my life, in my own deepest being, I know the power of stigma, discrimination, hatred and exclusion.

And, after twenty-five years as a judge, I have been witness to three facts. First, the destructive power of stigma and shame.  Second, the damage punitive and discriminatory laws inflict on public health responses.  Finally, how insufficient legal protections and inadequate legal remedies make the cruel load of HIV/AIDS infinitely worse.

Some 37.7 million people globally are living with HIV. For most of us, heartening developments have alleviated the burdens of death and illness and shame.  Today, we can fulfil our aspiration to reach the 90-90-90 target (90% of those with HIV must know their status, 90% of them to access treatment, and 90% of those to attain viral suppression).

In Africa, the epidemic however has a particular poignancy. Two-thirds of HIV cases are in Sub-Saharan Africa – and here young women make up 63% of new HIV infections.

Given these striking facts, the new strategy the UN body fighting to mitigate the epidemic – UNAIDS – announced was welcome.  This highlights how inequalities exacerbate AIDS.  Ending them is therefore at the core of UNAIDS’s new approach.

A rights-based approach is right.  It illuminates how human rights are all interconnected. The AIDS epidemic vividly instances this: the right to health cannot, in though or practice, be disconnected from the right to equality.

The lesson is clear: to overcome AIDS by 2030, we must achieve greater equality for all.

The good news is that protecting and respecting rights works in mitigating AIDS.  Evidence from UNAIDS powerfully shows how “inequalities fuel the HIV epidemic and block progress towards ending AIDS.”  As The Lancet rightly notes: “The success of the HIV response is predicated on equality – not only equality in access to prevention, care, and treatment … but also equality under the law.”

Human rights programs and sensible law reforms reduce stigma and discrimination.  Yet far too little funding and effort is channeled here.  The result is plain – in far too many societies, stigma sits as a dark burden on the backs of those living with and at risk of HIV and AIDS; discrimination permeates the societies and their laws – and repeal of misplaced, punitive laws is agonizingly slow.

No to punitive and discriminatory laws

Thus, too many countries still criminalize LGBTQI+ persons.  And transgender women are at enormously higher risk of contracting HIV.

And no one suffers discrimination solely on only one ground.  The poisonous perils of discrimination mingle in a multiplicity of hostile grounds – what is rightly called “intersectionality”.  A sex worker is attacked for their sexuality, gender, socio-economic status, and HIV status.  The disquieting result: sex workers, have a 26 times higher risk of contracting HIV.

In all this, the brutal force of the criminal law clenches the throat of good AIDS work.  It intensifies inequalities, unfairness and exclusions.

The point is this: criminalizing people living with HIV and punishing key populations undermines prevention efforts.  It reduces uptake of services.  And it can increase HIV infections.

These punitive laws do not merely “leave people behind”.  They actively shove them out.  They increase fear and stigma – and in turn push those most at risk away from health services and social protections.

As UNAIDS Executive Director, Winnie Byanyima, powerfully recounted, “Stigma killed my brother, he was HIV positive and would be living today but he was afraid to go to the clinic to fetch his ARVs because people he knew would find him there and would judge him.”  Her conclusion?  “We have to fight stigma and discrimination, they kill.”

Additional knock-on effects harm our societies.  Discrimination seeps into data and evidence collecting, where criminalized and stigmatized populations are often under-represented and omitted.

This reflects their day-to-day reality: their experience of an extreme form of stigma – being negated, invisible, wiped out.

This negation is profoundly harmful.  It means that we do not know whether services are accessible and acceptable.  It means important information may not be provided.  It means violence and discrimination against invisible populations remain unknown, unaddressed.

So, we must ask: How can you remove barriers to access services if you do not even see the persons they are crushing? What can we do?

At least one answer: We can help create enabling, empowering, safe-guarding legal environments.

The response to AIDS is linked to democratic values and functioning legal systems. The rule of law, freedom of expression, freedom to protest, and other basic human rights matter.

Creating an enabling legal environment is a critical step.  It means we employ the law to empower rather than oppress.  It means scrapping pointlessly punitive criminal laws. It means achieving equality before the law.

The last forty years showed us this.  Brave, principled, outspoken activists, from ACT UP in New York and the Treatment Action Campaign in South Africa, secured life-saving gains in treatment for AIDS.  The activists’ struggle was for justice and for finding the most effective response to AIDS. In South Africa, the activists challenged President Mbeki’s denialist government in the highest Court – which ordered him to start providing ARVs.

For them, as it was for me, and still is for too many today, the battle was about life versus death, wellness versus sickness, science versus harmful myths, discrimination versus justice and equality – and about how fair practices make sound public health sense and save lives.

The new UNAIDS strategy embraces this history.  It seeks to ensure access to justice and accountability for people living with or affected by HIV and key populations.  Rightly, it calls for: increased collaboration among key stakeholders, for supporting legal literacy programs, and for increased access to legal help.  From the international community, it also provides for substantial commitment, greater investments, and strategic diplomacy.

The Covid-19 pandemic has not alleviated these goals – its impact on inequality has made them more pressing.  Anti-infection lockdowns led to HIV and AIDS service disruptions (healthcare facilities were closed or resources were reallocated to Covid-19 or there were shortages of ARVs).

On the other hand, lessons have been learnt, and mRNA technology could speed up the development of AIDS vaccines.

Though there is still no cure, AIDS is no longer a death sentence.  Twenty four years after taking my first ARVs, I am living a vibrant, joyful life.  Our challenge lies within ourselves, and our societies: it is to overcome fear, discrimination and stigma to ensure life-saving treatments and messages are equally and equitably accessible.

Ending AIDS by 2030 is a realistic goal.  But to achieve it, we must respect, protect and fulfil the basic rights of those living with and at risk of HIV.  We must embrace democratic aspirations, place key populations at the center of our response, provide resources to reduce inequalities as well as inequities, and foster legal environments that enable us to end AIDS.

These harsh last forty years have shown us this: with enough support, science, focus and love, we can end AIDS.